Awaiting the arrival of the 2010 gear 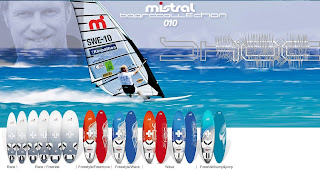 I anticipate the arrival of the 2010 Mistral line the most. The entire range has been reworked and not only do they have one shaper but 2 just to make sure everything is up to par. And this year the boards are being made somewhere other than the infamous Cobra factory and promises have been made that the durability will be greatly improved. The only fly in the ointment will be to see what they done with my beloved 2009 Joker. Could they have actually made THE perfect board better? Could the earliest planing board I've ever sailed plane earlier? Could the most fun to ride board I've ever sailed be made more fun to ride? My only hope was to not have the 2010 joker be a let down from the 2009 model.

Then I got my first peek at the 2010 mistral line: http://windsurfing.mistral.com and my faith was restored. Not only are the dimensions pretty much the same as the 2009 model with the 98 and 108 ltr, but they've also added another board to the lineup. The Joker Wave. it comes in an 85 and 95 ltr. I'll take the 85 ltr please! It will compliment the 98 ltr I'll be using as the bread and butter board. I'm so psyched for the 2010s!!! I haven't heard about an arrival date but I know it will be some time this fall. For now we'll keep waiting for wind.
Posted by Mike Burns at 10:10 AM