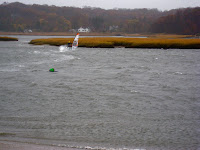 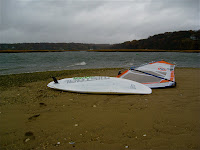 A Not So Typical Week in Hatteras

Windy foreast. Check. Warm weather. Check. House full of friends. Check. Sounds like a your typical trip to Cape Hatteras, NC right. Well that's how it started off. The ride down was great and we were meeting up with Some friends from Boston, CT, and NYC, and Long Island. We ended up pulling into Island Creek Friday night and couldn't wait for the winds to come. Chris Eldridge had managed to get there Friday morning and sailed all day mostly overpowered on his 4.2.

Saturday morning I woke up at 6:45 AM from the wind howling through the screens on the bedroom window. For the record, the sounds of the wind blowing will wake me up quicker than smelling salt. I dove into my wetsuit and rigged my favorite board/sail combo. The 2010 4.7 Ice and 99 ltr Joker. I was on the water by 7:00AM. I had the entire sound to myself. After 2 hours of slipping, sliding, jumping and spinning I began to wonder where everyone else was. When Chris finally made it out onto the water, I asked him what was taking so long. It turned out that I got on the water before anyone was even awake. The wind direction had me sailing just North of the house and blocked from the view out the back windows. They were all waiting for me to get up to go sail. By the time they all realized I was already out, and had been for hours, the wind started dying. We all ended up getting a nice session, but they definitely missed most of it.

The forecast for the rest of the week was pretty typical. Windy just about every day. The only thing standing out was one "gift from god" forecasted SE wind around 30. We strolled over to Ocean Air to chat with the guys about the SE forecast for the Cove. I mentioned it to Stuart with a huge smile on my face. "Don't get too excited, that only happens once a year no matter what the forecast says." so says Stuart. Well, I figured it's December, the cove day hadn't happened yet, so this has got to be it!

We had a couple more windy days, and some great sailing. As "Cove Wednesday" got closer the forecast remained the same. When Wednesday finally arrived we scrambled to check the meters. It was already in the low 20s and forecasted to increase. We all piled into my Expedition and headed down to the cove. We drove on the beach like we were racing in the Baja 1000. The truck was filled with anticipation, expectations, and memories of the last Cove day we had there 2 years ago. Then with a last heavenly thought we saw the water. Flat!!!!! Not just little waves flat, but as flat as behind the houses in the sound! The wind was there, but where was the logo high, down the line beauties from the last time. Disappointing would be the understatement of the year. There were only 2 kiters on the water as I looked again in denial of what of was seeing. I was so depressed I didn't even feel like sailing. We drove back up the beach at a snails pace not believing what we had just seen. We pulled back out over the cut in the dune and back onto the pavement to tell the guys with 2 wheel drive waiting for a ride the bad news. As I shifted back into 2 wheel drive and got ready to go home, I caught a glimpse of Mark Skelton. He's airing down and getting ready to go down to the Cove. Well, if he's going, I guess I'm going too.

As we pulled back in at the launch, much to my surprise there were some little waves beginning to break. "What's this?" I thought to myself. "Wait a minute. The wind has picked up too." I stepped out of the car, and knew the 4.2 was the call. Just as I finished rigging, Andy showed up with Doug in tow and told me to be patient. "Waves just start out of nowhwhere at the Cove and it'll be head high before you know it. " Andy said with a big smile on his face while watching Stuart rotate through the first forward of the day.

By the time I hit the water there were a few nice chest high sets coming in, and from there they just grew. As the waves grew in size, so did the height of the jumps. I hit some really nice high stalled forwards, and got some nice little wave rides on the way in. Then on one tack out, I saw it. The perfect ramp to chuck a huge forward. For a fraction of a second I thought about going for a normal big floaty jump but then my little voice kicked in and said "Just go huge." So huge I go. I went up, then up some more. Then set up for the forward, then stalled it out cause I was still too high. Then looked around, then stalled it out some more. Then I started coming down, but I looked down and was still too high so I stalled it out some more. I didn't want to throw it too early and over-rotate so I stalled some more. Then finally I sheet in and round we go. About 3/4 way around I realize I should have waited just a bit longer. I tried my best to slow the rotation, but ended up over-rotating and landing as flat as flat can be. My front leg took most of the impact and I felt the pain shoot right up my leg. I knew something was wrong right away. Long story short, I sprained my ankle pretty bad and had trouble sailing back in. While I was sailing in, I thought it was broken. Hopping in on one foot through the break was interesting to say the least. I sat on the beach watching the perfect day just pass right by. After a while I was able to put pressure on the ankle again. It looked like someone stuck and egg in the side of my ankle, but my windsurfer instinct took aver and I headed back out for another session. Jumping was obviously out of the question. All I was hoping for was a few one-footed wave rides.

My first run in I picked a nice small wave to give it a try. I got into the wave. Not much pain, so I went for the bottom turn. It hurt like hell, but it was worth it. Then it was time for the top turn. The sprain was on my back foot, so as I slashed the turn it felt like my foot was going to be ripped off. I jumped off the board and was me cursing up a storm both from pain caused by the injury and disgust that I couldn't take advantage of the now incredible conditions. I sat on the beach for a little wile longer before I decided to give it yet a third try. "Right foot." I kept telling myself. "Only use your right foot. The left one will hurt." So I continued on without giving in to the need to "go huge" again. I ended up perfecting the one footed top turn and sailed for another half hour or so before the pain was too great.

Then it was off to get an x-ray. the whole time I was sailing I just kept praying it was only a sprain and not broken. In the end it was only a sprain, but I had to stay beached for the rest of the trip, and the next 2 great days days of sailing. A week later, I'm off the crutches and cast free. I still can't walk straight, but it's getting better every day, so hopefully I'll be on the water again very soon.

All in all, it was another great trip to Hatteras. We had a photographer there that got some great shots of the action at the Cove that day. As soon as I get the pictures I 'll have them online.
Posted by Mike Burns at 6:21 PM 5 comments: