It's that time of year when all the shops, and team Riders make their wish list for the next years gear. The closest thing that I can compare this time of year to is when I was much younger than I am now, and I was making out my Christmas list and sending it off to Santa. Every year I would hope that I was a good enough little boy to get all those things I had asked for on my list. It's almost the same exact feeling now while I'm placing my 2012 gear order. I know Santa's little elves have been watching me all year long and I just hope they haven't seen me causing all sorts of trouble this year.

Now the second part of the wish list is trying to go through that giant toy catalog and only choose the very few toys that you want the most. Well, the newest toy catalog offered by North Sails has simply made it very difficult to figure out which toys to choose. I want them all!!!! I was all set to order up the usual Ices and Dukes, but wait, there's a Hero and ID. So now I have to ask myself, what kind of a boy will I be this year. A hardcore wave sailor or a freestyle wizard. The reality always sets in that I live in NY where there are no good waves, at least not often enough to justify a true wave quiver, like the full x-ply Ice. So I always wind up choosing the sails that suit freestyle the best. So it's usually 5.3 and down Ices and a 5.9 Duke, but it's North's newest creation, the ID that I truly have my eyes set on. The ID stands for Ice/Duke which is an incredibly light version of those sails. It's an Ice from 5.0 down and a Duke from the 5.4 up. Ready for the bombshell.......the 2012 5.0 ID is the same exact weight of the 2012 3.4 Ice!! And the Ice already lost some weight from 2011! North is using a new material for them in the ID sails. On the website they openly offer up that it's true that due to the new material that the norths aren't covered under the typical 5 year warranty. But, considering the new material that isn't making par on Norths 5 year warranty is the same material that all those Ezzy riders rave about in quality, there's no doubt in my mind that these sails will have a nice long life to them as well.

Well, the sails were difficult enough, but now I have to chose boards! This was actually a no-brainer. The pair of 2011 skates I have right now are the best boards I've ever used in my life! Please sir may I have another. The 2012 Fanatic Skate Team edition in the 89 and 99 versions better be in Santa's sleigh.

Makani Fins not only have some really great products, (Makani is all I'm using now) but they are really into the sport and seeing it grow. I've talked to the Makani guys about starting events, and I'v seen them have some great clinics in the past. So check out the latest clinic in Hatteras.

Posted by Mike Burns at 7:46 AM No comments: 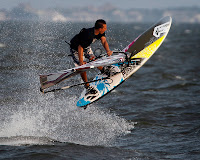 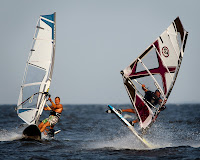 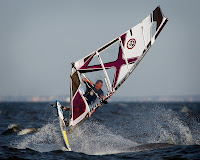