I woke up this morning to a cool breeze making a whistling noise through the open bedroom window. It was time to get another great session out this strong Easterly breeze. I waited until about noon to head to the beach. Heckscher would be the call today as the meters were reading due east and gusting to 30. (which means it's well into the 30s for the average) I downed a couple of bottles of water before getting into the car. I was still dehydrated from yesterday's session at Napeague.

When I got to the beach, Joe was thinking about rigging down to his 3.1 and Ethan was lit on his 3.5. Well all's I got is my 3.7 so that's going to have to do. When I hit the water with the 3.7 and brand new 85 ltr Mistral Style it was soooo perfect. Big ramps and the the strong wind made for some big airs for everyone. That Style rocks! It jumps so easily and you can really dig in the rail and crank the turns very hard without even worrying about the rail catching.

The wind dropped off a bit a couple hours into it and some guys rigged up to their 4.2s. I was still just fine on my 3.7. At least now I could do some freestyle stuff too. On one run I ended up chasing Ryan way out into the middle of the bay, maybe 2 miles out and we were just having a blast taking turns cutting in front of each other on the chest high rollers. Luckily we only did a run or two of that and decided to stay a bit closer to shore. About 3 runs later i was following Ryan in on a run, we were both fully planing then suddenly it was like he ran into something and his board just stopped dead. Just as I was catching up to him the same thing happened to me. The wind had gone from 25 - 30 to about 6 in the matter of 2 seconds. I was still behind him and I found it hysterical to watch a 195 pounder try to sail a 4.2 and 85 ltr board while up to his waist in water. I was still able to stay knee to ankle deep with my 3.7. Finally when we were about 100 yards from shore Ryan went down. The wind just totally shut off. I could barely make out which way the wind was coming from. I was schlogging past Ryan who was still convinced that a puff would come through to get him to waterstart but there was just nothing. I made sure I laughed loud enough for him to here me as he replied ,"Shut up you light little bastard!" I made it about 10 feet past Ryan then I went in. We were both laughing our asses off, as we were swimming it in. It was a great day with great people. Can't wait until next time.

Bill Doughtney was at the beach snapping away photos for a while. Here are a few of the highlights:


Ethan catching air on his 3.5 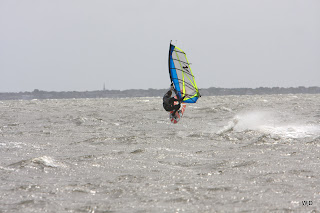 Big Rich gets some 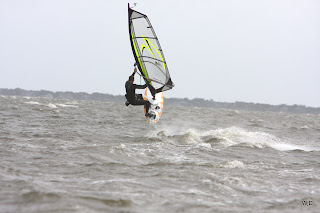 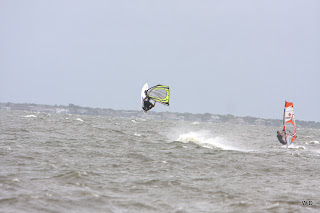 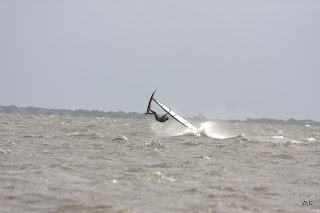 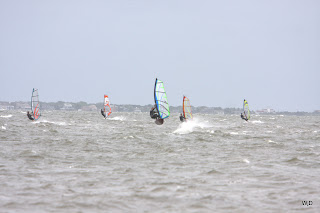 A couple of yours truly 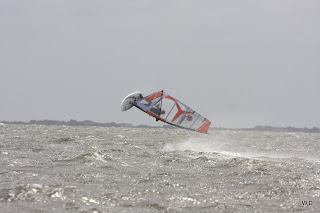 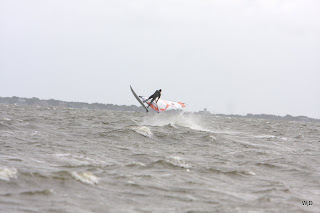 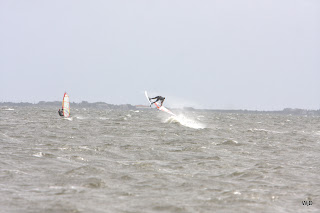 Look it's me again. Sharing some laughs with Ryan and Seth after the swim in. 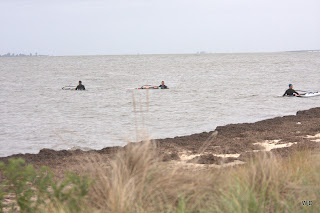