Another Great Easterly at Heckscher

My hopes weren't too high when I was heading off to the beach. The forecast was for yet another East/NE wind to blow on LI. I had hoped to give Demo a try but the wind was looking a little flukey and I had heard the waves were only about waist high. Then, Ethan posted up that he's sailing at Heckscher on the LI windsurfing group. So Heckscher would be the call once again. When I pulled in Joe Rocco was rigging his 4.2. It looked a little light on the inside even though the outside was surely 4.2. So I rigged up the 4.7 because I wanted to try some tricks close to shore on starboard (my weaker tack.) Joe and I launched together, and then we were off. He was blasting along fine on his 4.2 and I was well powered to say the least on my 4.7. The wind was steady, strong and the ramps weren't too big but were straight up, so getting some good air was pretty easy.

On one tack out I saw a ferry coming way out of the usual route that the ferries take. I noticed it had a blue hull with a white top. That's Billy T's boat!!! I figured he was coming close to check out how we were doing. I jibed outside as the rather large boat passed between me and the beach. Billy had planned it out perfectly. He was going to throw up a huge wake for me to go big on. As I approached Billy popped out of the cabin and made a windmill motion with his arms signaling me to throw a big forward. What Billy didn't realize is that my starboard tack (the tack I was on) is my retarded side. I couldn't complete a forward on starboard tack if someone started me off already upside down. Then suddenly that perfect ramp for a backloop made it's appearance. It was amazing and was there for my taking. I can bang out backloops on starboard and I would surely give the guys on the ferry a great show. As I approached I could picture myself rotating cleanly through the loop. I could already spot my landing before I'm even in the air. Then as quickly as the ramp appeared, Billy's big ass wake knocked the ramp down and I just ended up sailing by. I did manage to jibe and head back out to catch a little forward action off his wake, but I figured he wasn't watching and trying to explain to the guy next to him "I don't know what went wrong. Normally that guy's pretty good." Well Billy, I truly thank you for bringing your ferry all the way over just so I could throw a loop, but next time remember I'm retarded on starboard tack. So if it's not too much trouble make sure I'm on port tack when I hit your wake and I promise I'll give you a show. Now if I had only gone to the ABK clinic last year, maybe my starboard loops would be just fine.

Check out some pics from today thanks to Bill Doutney:

Billy T's ferry. I must be behind the boat in the picture setting up for that perfect back loop. 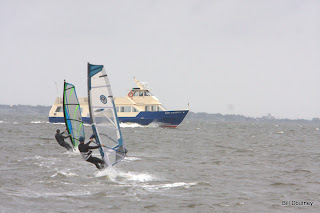 Easterlies at heckscher set up great ramps for learning shuvits and shakas. I managed to pick a nice one for this shot. 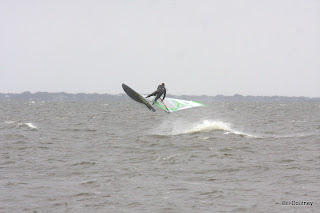 Big Rich catches some air next to Seth 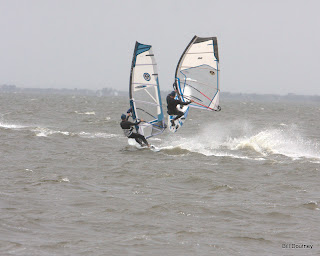 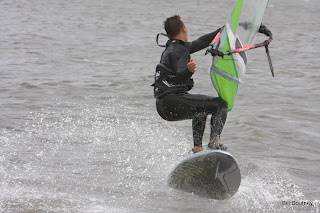 and a nice one handed funnel 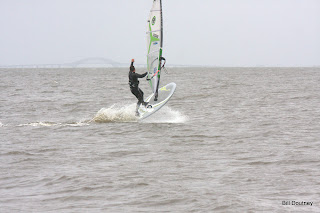 Some of the Heckscher regulars 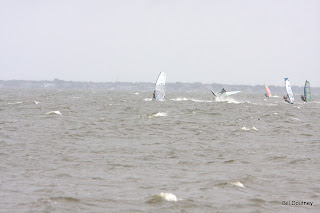