SEPTEMBER: a month in 800 words or less

So this summer didn't deal up the usual epic conditions we're used to at Heckscher. Don't get me wrong, we had plenty of wind with a bunch of 5.3 and 5.9 days. It even was pretty good in August which along with September are the two least windy months of the year. This September has been very different. Very, VERY different. today was day 13 that I sailed this month and it looks like we're going out with a bang. I've also been swamped with work, so I've missed a good bit of wind too. we've got to be on day 17 or 18 of sailable days for Sept. The first week in Sept. we had a streak of 7 windy days of which I grabbed 6. Right now we're into day 4 of which I've nailed 3 and it looks to stay windy right through the weekend.

Not only have we had lots of wind, but we're still getting some summertime temperatures. I managed to get not 1 but 2 of the best low tide, full power freestyle West Meadow sessions this month. Not only were they incredible, but they were also in board shorts. I don't think board shorts and West Meadow have ever been mentioned in the same sentence before. We've also grabbed a few perfect sessions at the training grounds, a little freestyle spot we found this past winter. So far so good for the "fall" season.

New gear has also been arriving. The 2011 North Ices and Dukes are even better than ever. I've had them for a few weeks now. North has just keeps making little tweaks the past few years. This year they're more locked down when they get really powered than last year and so the upper range has increased even more. They're also even lighter while tossing them around and maybe ever so slightly more springy in feel. Anyway, I've been making moves easier than ever. I'll be posting up a full review when I finally manage to grab some pictures. For now we'll just say that they rock!

NoLimits shipped out my 2011 masts today. They've got few tricks up their sleeves with the 2011 design. Rumors are that they redesigned the bend curve ever so slightly for the new generation of sails. So if you want to try a mast that just might work better than your sail manufacturer's mast at 1/2 the price, give the new NoLimitz a shot. I'll post up a review on the new masts after I've had a few sessions on different sails with them.

Chinook is also redesigning their carbon wave booms. no word on exactly when they will be ready, but I've heard rumors of some 1-offs already floating around some shops to see what they think, so it should be shortly.

Maybe some BIG news in the board dept. for me. We'll see if things come through.

September has come and the wind is back in a big way! We've had more sailing days than not in the past couple weeks. Actually today was officially day 7 in a row of sailable conditions on LI. Hurricane Earl promised us some 50 knot + winds. The only problem is that Earl took a more Easterly path than originally thought and the only people that got to sail were all the way out on the tip of Long Island at Napeague. I eagerly awaited another session at the Training Grounds in all of Earl's glory but ended up getting skunked with gusts up to 12 knots along with everyone else on the North Shore.

But I should be the last to complain. I've sailed more days than not so far in the month of September and it looks like we'll get yet another good day tomorrow. The day following the windless Hurricane was my best day of the season. It was probably the first time I sailed West Meadow without a wetsuit. We arrived at high tide with some great ramps for the perfect loopfest and stayed until the tide went out where I was hitting trick after trick in the perfect flat water behind the sand bars. I had to cut that day short to go shoot a wedding, which turned out to be a great party! Win, win!

Then it was back to summer-like conditions at Heckscher for the next few days. Tuesday was incredible. Fully, fully powered on a 4.7 with gusts over 30 towards the end. There were a bunch of people out and Ryan, Rob and Joe were also on the scene going for loops, flakas, shuvit's and landing vulcans. Chris Goodwin, who is definitely someone to keep your eyes on, was overpowered on his 5.8 (his smallest sail) so he decided to stop and take some pics. here are a few of my favorites. 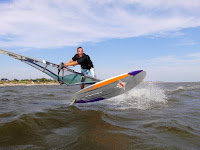 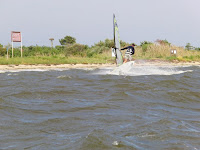 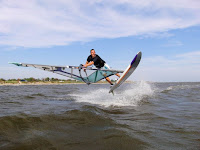 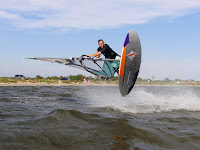 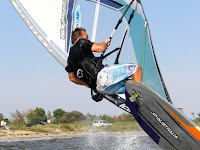 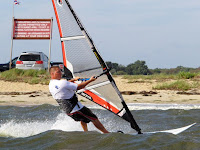